The WordPress.com stats helper monkeys prepared a 2013 annual report for this blog.

The concert hall at the Sydney Opera House holds 2,700 people. This blog was viewed about 56,000 times in 2013. If it were a concert at Sydney Opera House, it would take about 21 sold-out performances for that many people to see it. 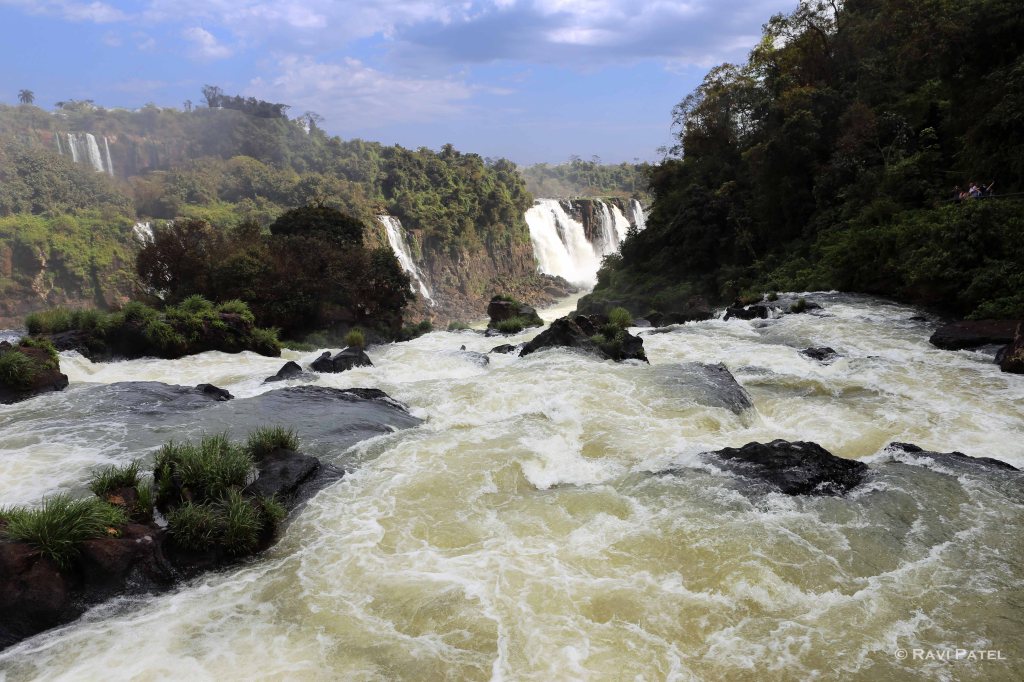 Voted as one of the 7 Natural Wonders of the World, Iguazu Falls is undoubtedly the most visited place and one of the most imposing natural attractions in Argentina, Brazil and the World. 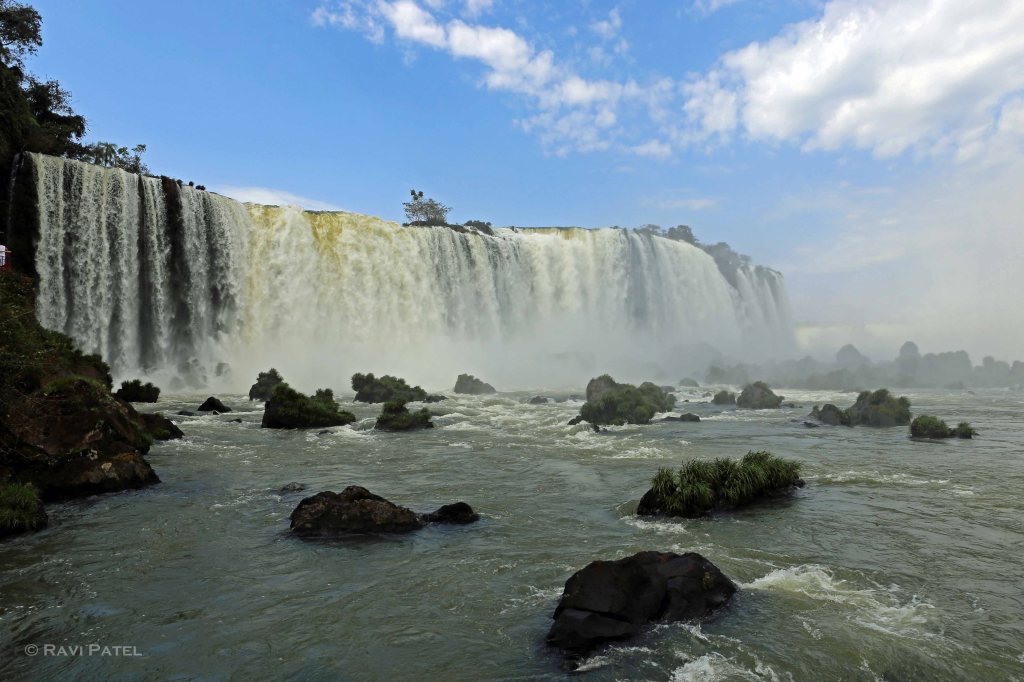 Next to Iguazu Falls along the river and on the islands a highly specialized ecosystem full of life has evolved in response to the extreme conditions of the tumbling water and soaking humidity. 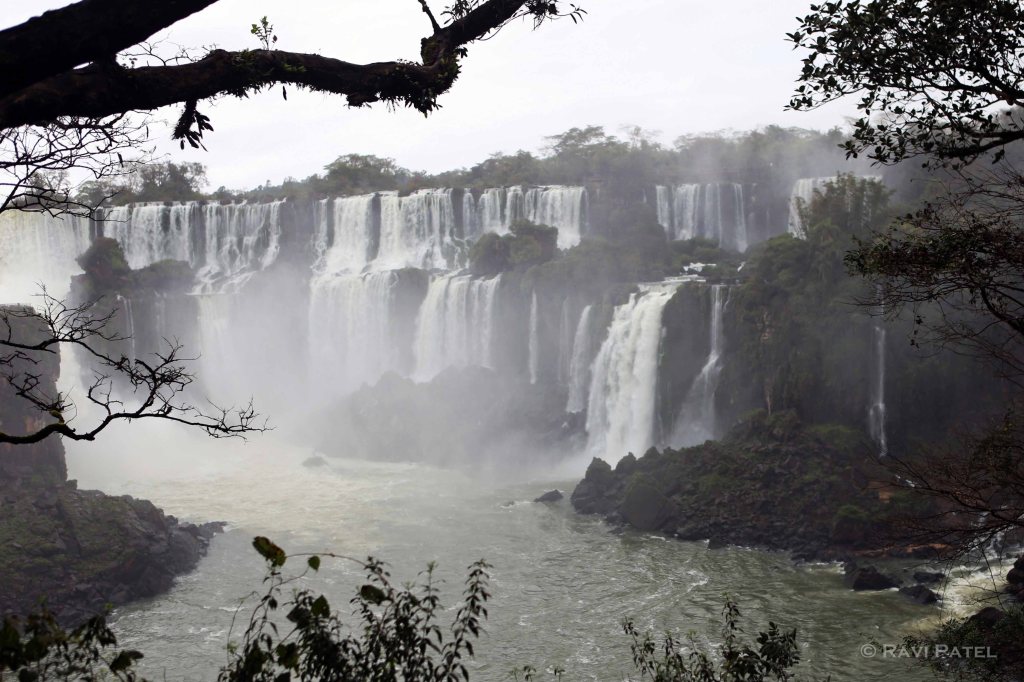 Iguazu Falls are part of a singular practically virgin jungle ecosystem protected by Argentine and Brazilian national parks on either side of the cascades. Various species of trees and vegetation grow along the river and among the rocks. 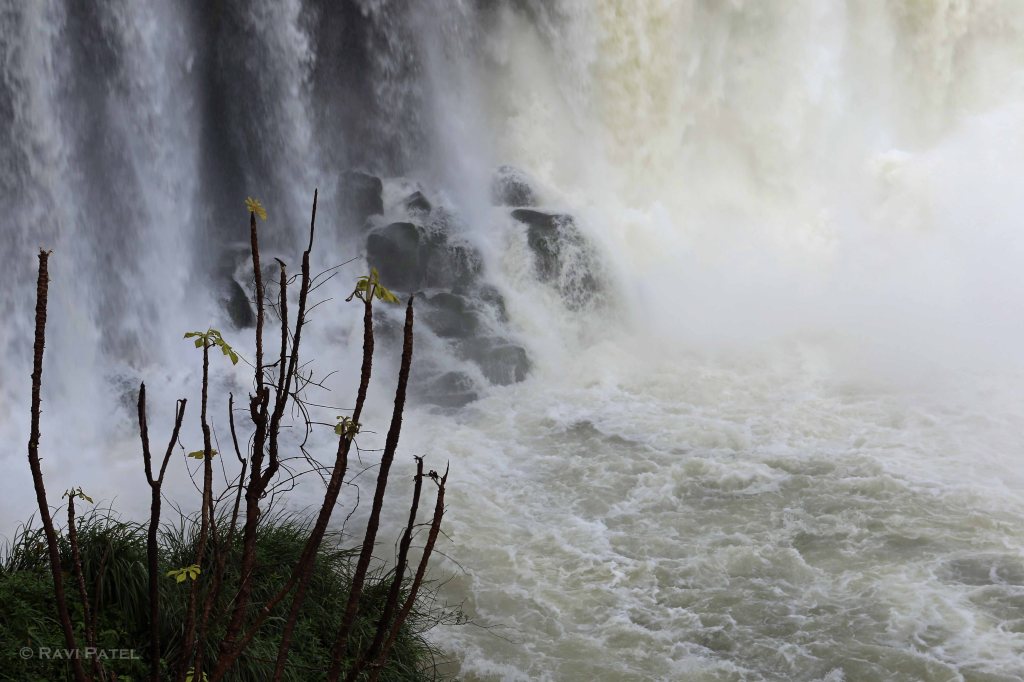 During the rainy season of November – March at Iguazu Falls, the rate of flow of water going over the falls may reach 450,000 cubic feet (12,750 cubic m) per second with tremendous force

The grandeur of Iguazu Falls, the tremendous amount of water (an average of 553 cubic feet per second) thundering down 269 feet, and the tropical location cannot describe the sheer beauty 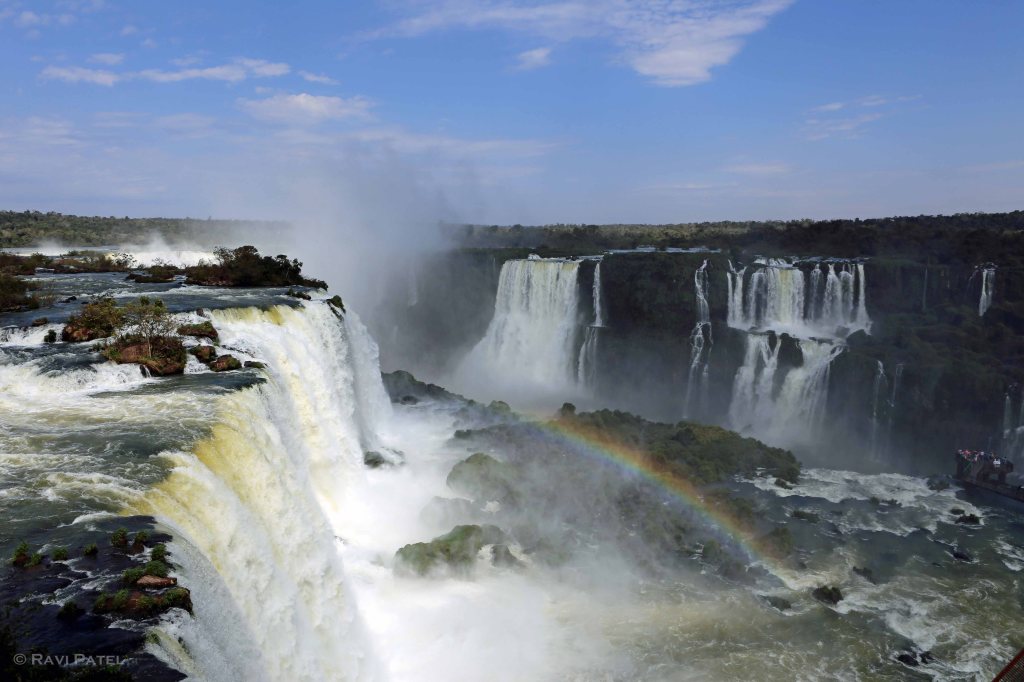 Waterfall rainbows are not even an especially rare phenomenon at Iguazu Falls, but they are spectacular. As if waterfalls were not extravagant enough, nature  goes and really creates a feast for the eyes by throwing in a rainbow for free.  Rampaging water, perennially worn rocks, and the seven colours of the spectrum just to top it all off. 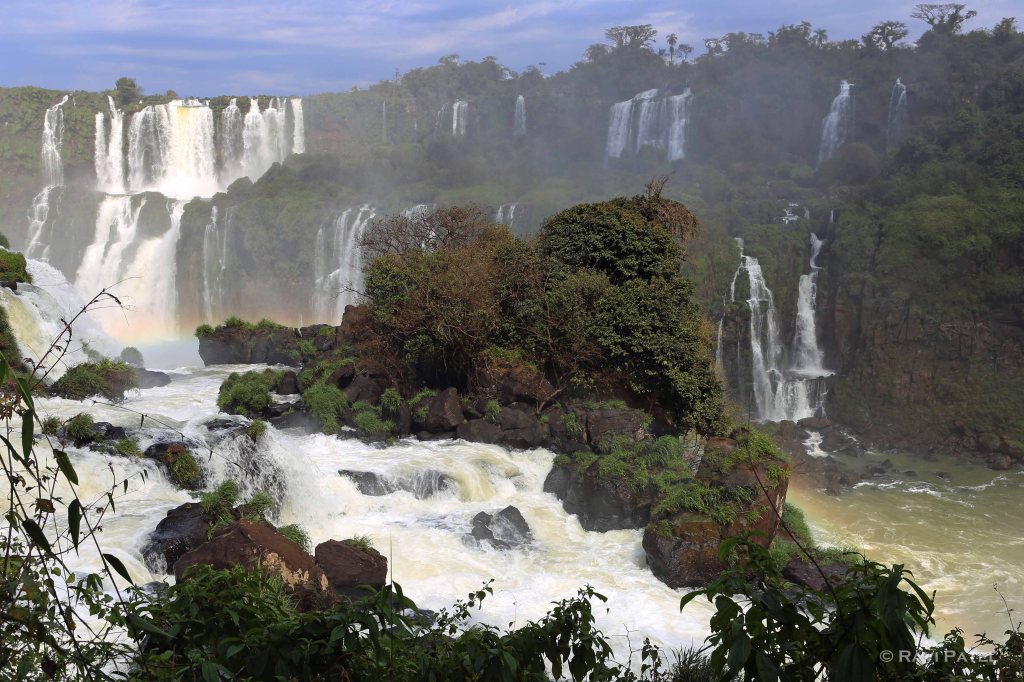 The permanent spray from the cataracts forms impressive clouds that soak the forested islands and river banks resulting in a visually stunning and constantly changing interface between land and water.

Iguazu Falls – A Curtain of Water

Made up of many cascades producing vast sprays of water, Iguazu is one of the most spectacular waterfalls in the world. 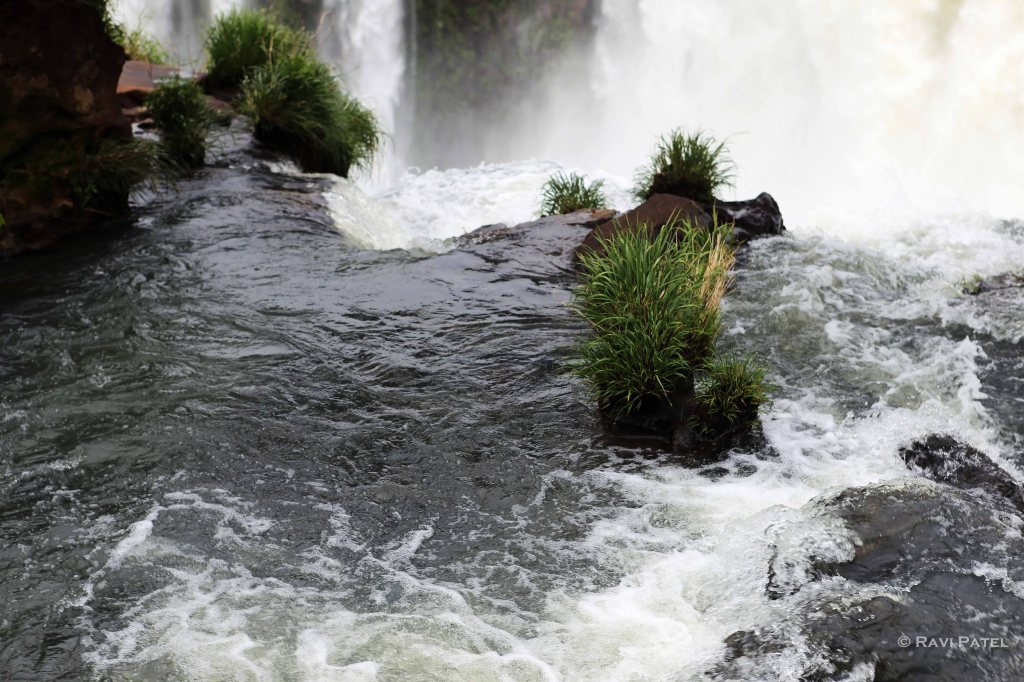 Iguazu Falls – Calm Before the Drop 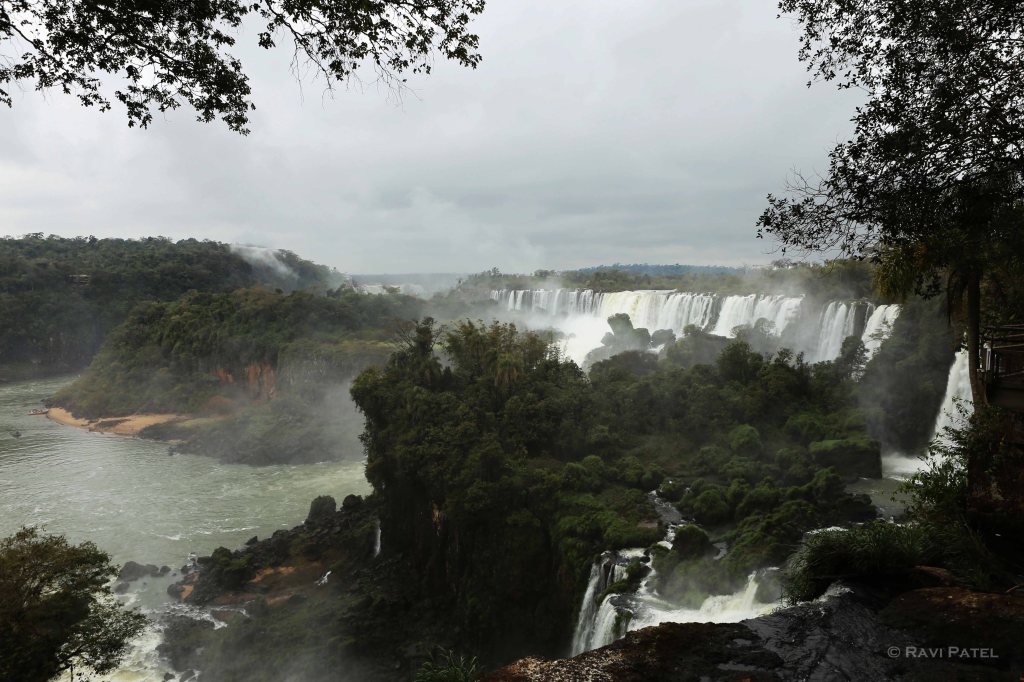 The semicircular waterfall at the heart of this site is some 80 m high and 2,700 m in diameter and is situated on a basaltic line spanning the border between Argentina and Brazil. 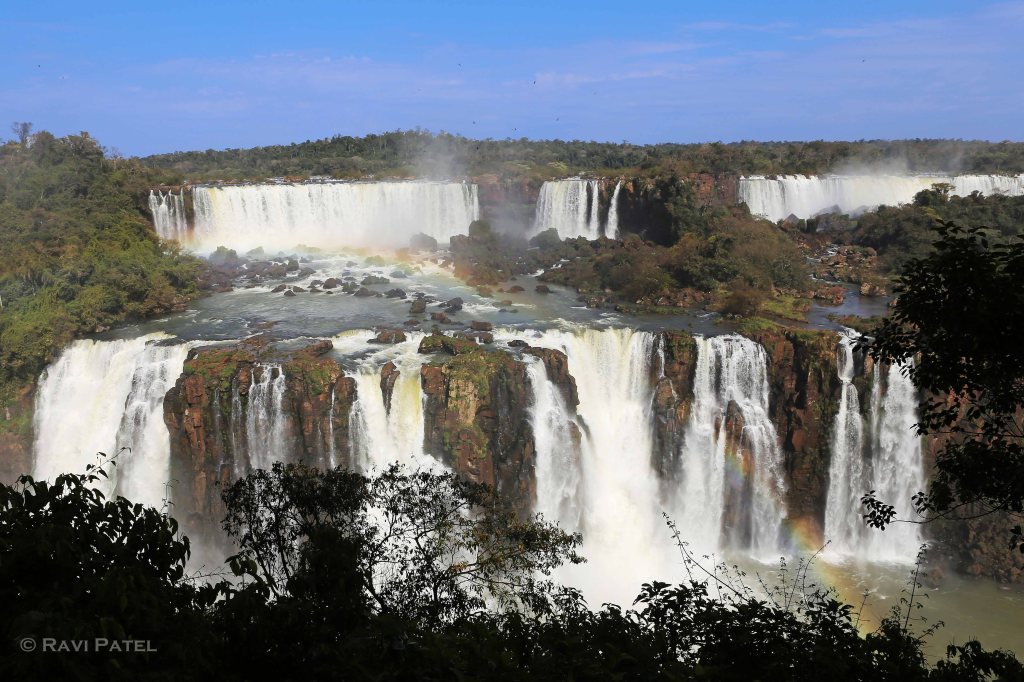 Taller than Niagara Falls, twice as wide with 275 cascades spread in a horseshoe shape over nearly two miles of the Iguazu River,  Iguazú Falls are the result of a volcanic eruption which left yet another large crack in the earth. 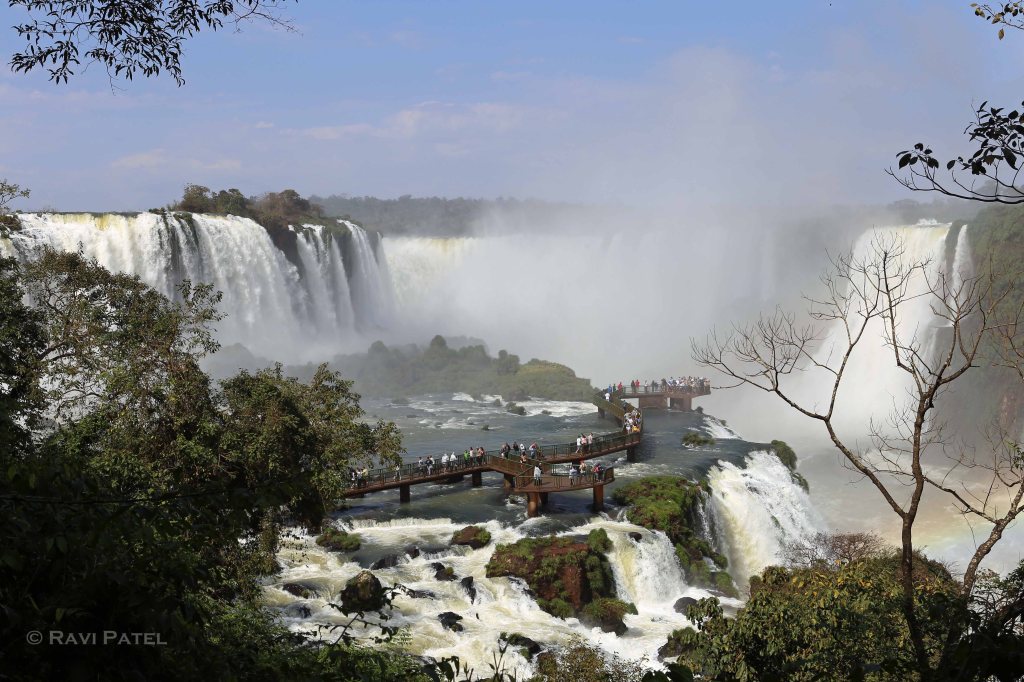 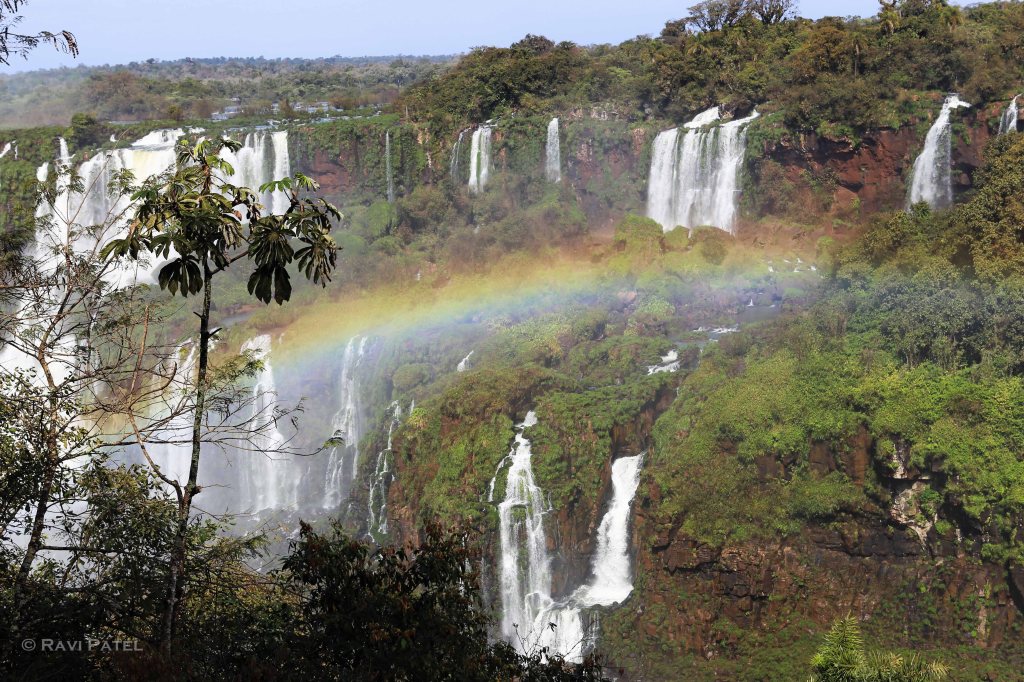 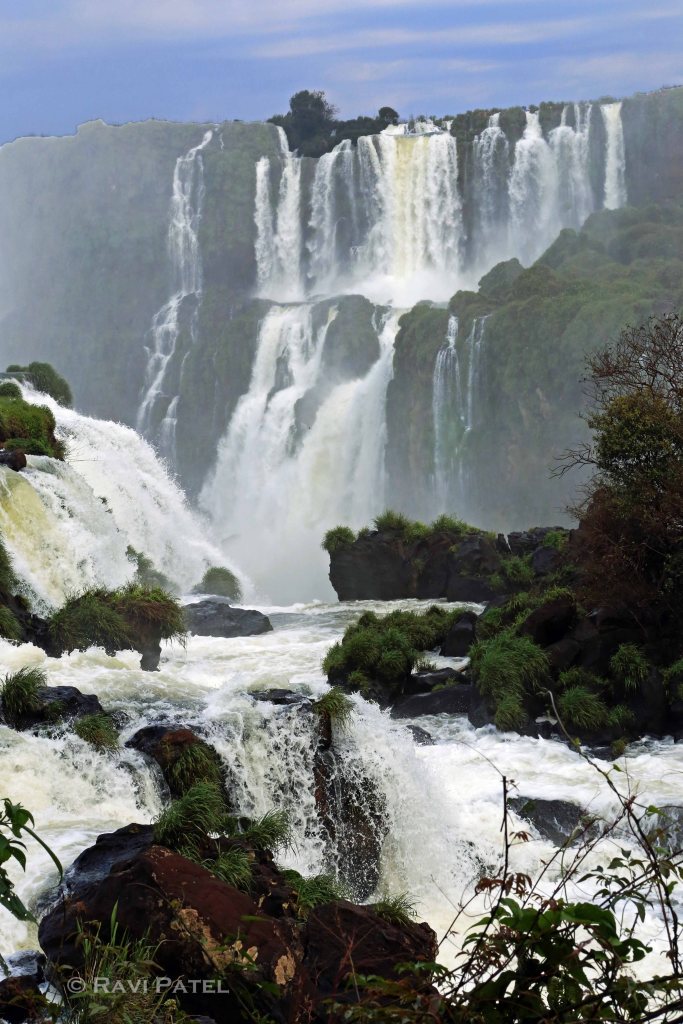 The Iguazu Falls span the border between Argentina and Brazil are made up of many cascades that generate vast sprays of water and produce one of the most spectacular waterfalls in the world. 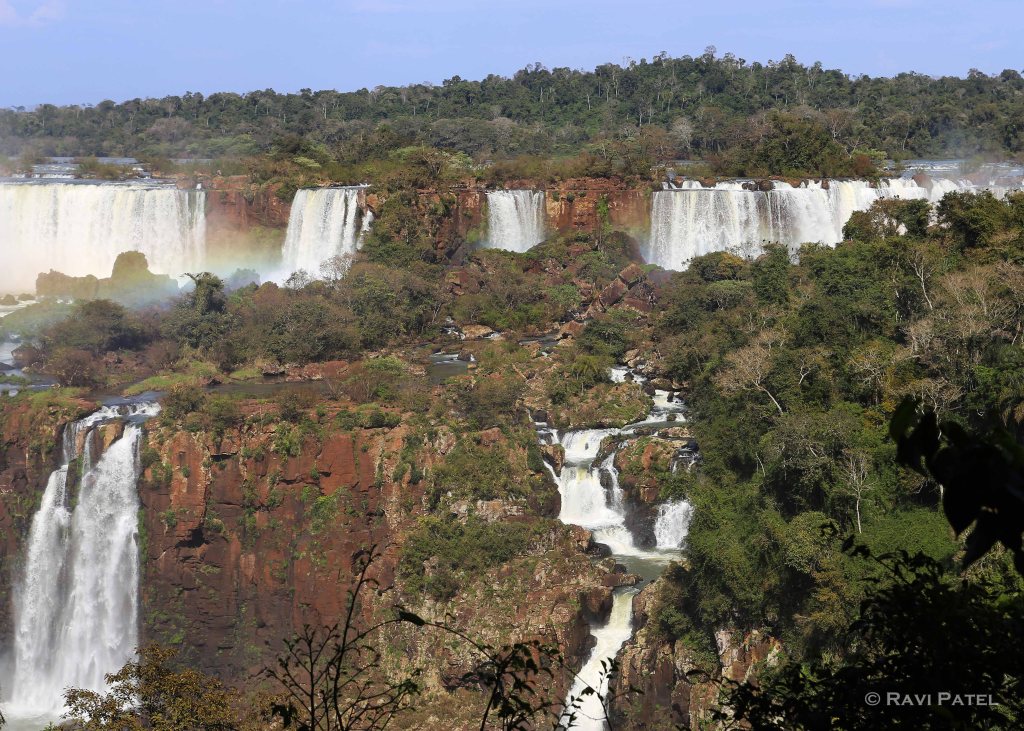 Some 80 m high and 3 km wide, the falls are made up of many cascades 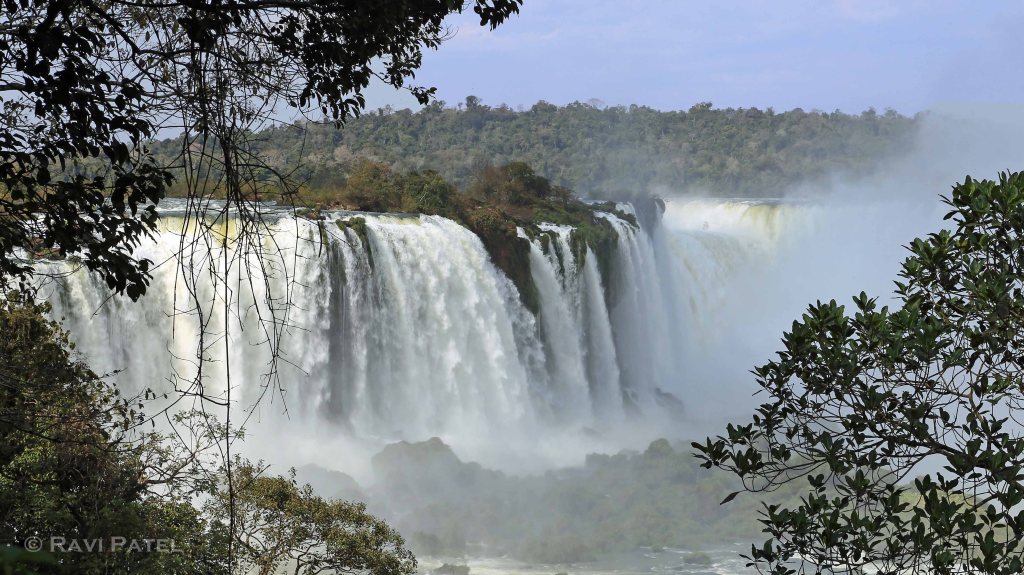 Iguazu Falls – Through the Trees

Walking along natural, winding, forest trails here is a view through the trees from the Brazilian side 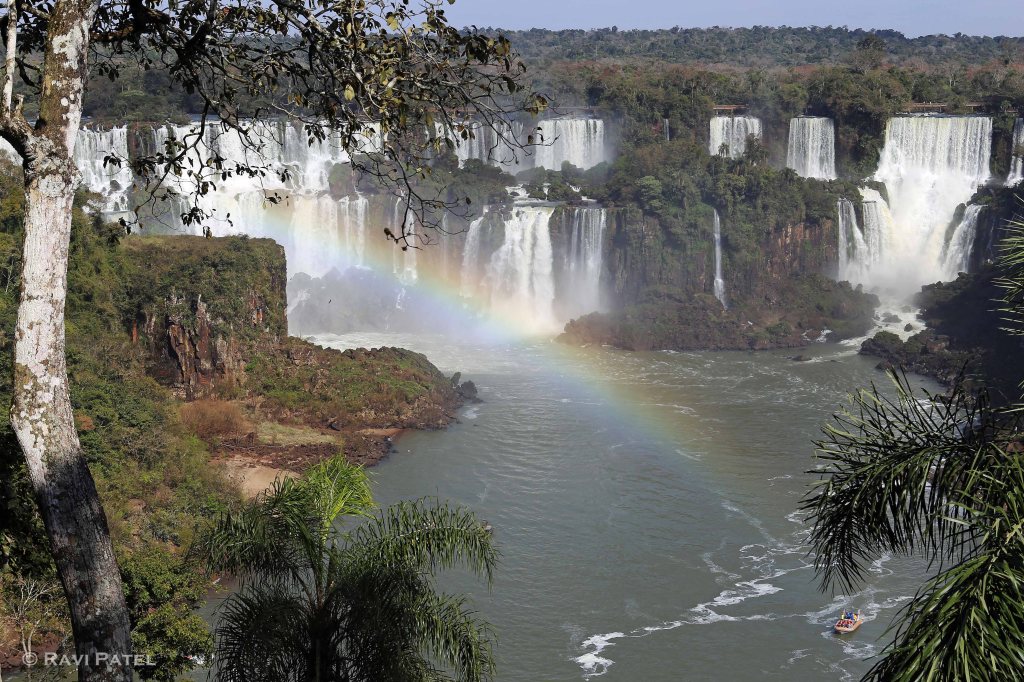 The Iguazu Falls span the border between Argentina and Brazil. Some 80 m high and 3 km wide, the falls are made up of many cascades that generate vast sprays of water and produce one of the most spectacular waterfalls in the world. 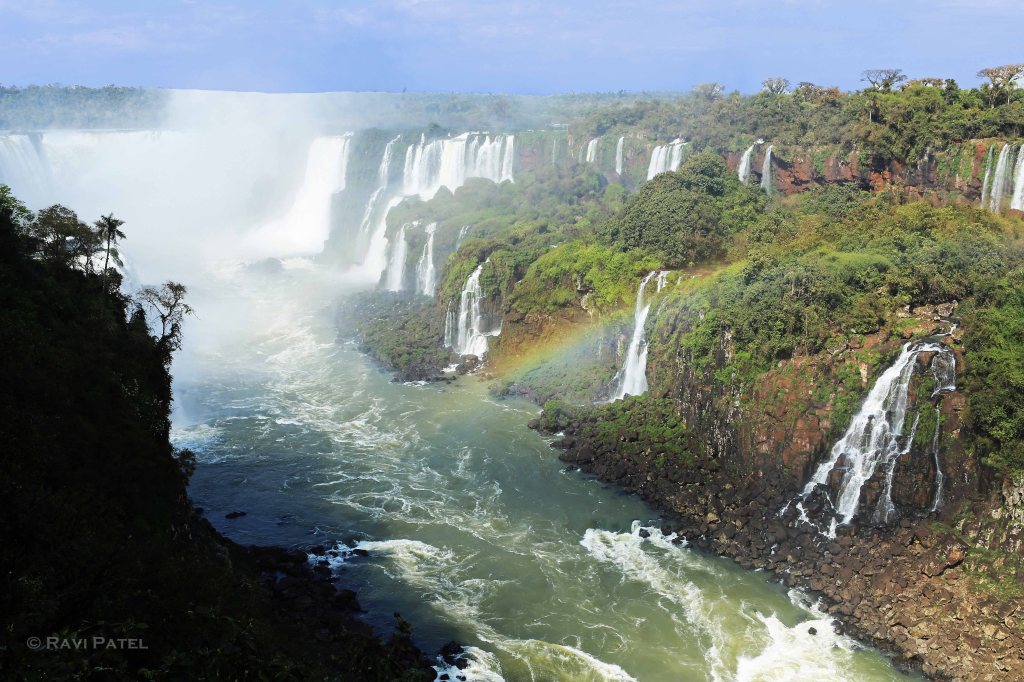 Located in Misiones Province in the Northeastern tip of Argentina and bordering the Brazilian state of Parana to the north, Iguazú National Park, jointly with its sister park Iguaçu in Brazil, is among the world’s visually and acoustically most stunning natural sites for its massive waterfalls. It was inscribed on the World Heritage List in 1984. Across a width of almost three kilometres the Iguazú or Iguaçu River, drops vertically some 80 meters in a series of cataracts. The river, aptly named after the indigenous term for “great water” forms a large bend in the shape of a horseshoe in the heart of the two parks and constitutes the international border between Argentina and Brazil before it flows into the mighty Parana River less than 25 kilometres downriver from the park. 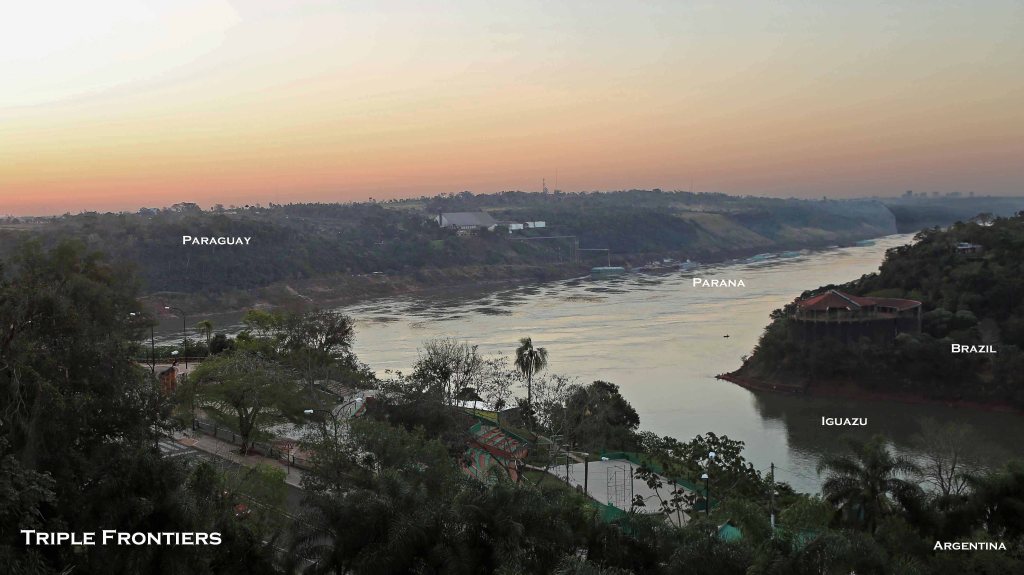 Will be posting over the next few weeks photos from a just completed trip to South America. Dusk at Triple Frontiers – a convergence of the borders of Argentina, Brazil and Paraguay and the Iguazu and Parana rivers at Puerto Iguazu, Argentina.