SeaWorld presented a float with creatures from under the sea. 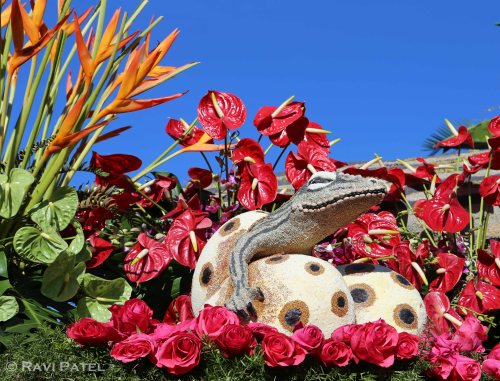 As the name implies, the Rose Parade features floats that use a variety of roses. However, the different types of flowers and natural materials used to decorate the floats is mind-blowing. The colors are often overwhelming.

It is a rule of the Rose Parade that all surfaces of the float framework must be covered in natural materials (such as flowers, plants, seaweeds, seeds, bark, vegetables, or nuts, for example); furthermore, no artificial flowers or plant material are allowed, nor can the materials be artificially colored.

Originally the Rose Parade featured flower-decorated horse carriages. Over time, floats built by volunteers from sponsoring communities supplanted the carriages. Currently most are built by professional float building companies and take nearly a year to construct.

Though a little late, here is a series on the interesting floats of the Rose Parade 2014.

The Rose Parade, traditionally the Tournament of Roses Parade, is part of “America’s New Year Celebration” held in Pasadena, California each year, a festival of flower-covered floats, marching bands, and equestrians on New Year’s Day (but moved to Monday, January 2 if New Year’s Day falls on a Sunday.

Originally started on January 1, 1890, the Rose Parade is watched in person by hundreds of thousands of spectators on the parade route, and is broadcast on multiple television networks in the United States. It is seen by millions more on television worldwide in more than 100 international territories and countries.