A park bench to view the cloudy sunset in Corning, New York

Watching a Sunset in Corning NY

Artemus the Bison bursting out of the Rockwell Museum of Western Art, Corning NY 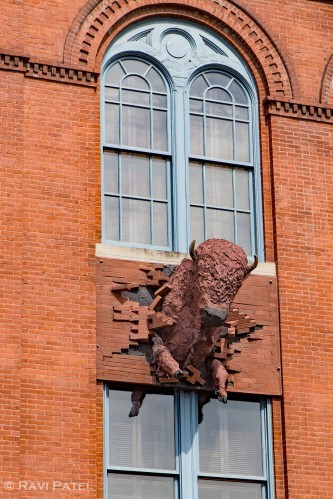 A depiction of Saint Mark’s Basilica (Venice) is beautifully made up in a glass nicromosaic at the Corning Museum of Glass, Corning, New York.

This may be the largest Venetian micromosaic in existence. It measures five by seven feet, and it weighs one ton. As a rule, micromosaics are small works that emphasize detail; rarely do they exceed the size of a modest painting. This panel depicts Venice’s Piazza San Marco and its basilica. It provides an almost photographic record of the mosaic decoration on the basilica’s facade as it existed at the start of the 20th century. The panel is signed by the mosaicist E. Cerato, and it was on display in the store of the glass company Pauly & C. at the Piazza San Marco until the late 1950s. Developed in Italy during the late 18th and early 19th centuries, the micromosaic technique made use of minute tesserae of colored glass that were arranged to create painterly effects. These tesserae were cut from thin opaque glass rods, of which there were more than 20,000 different tints. 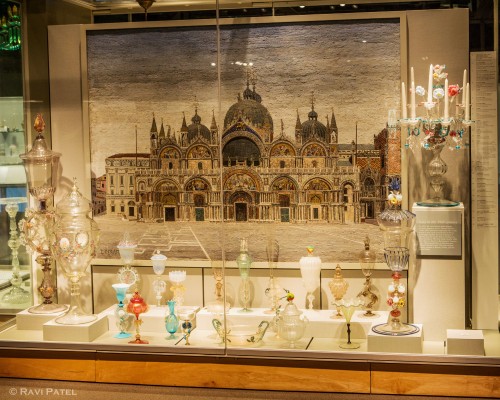 The Corning Museum of Glass is a museum in Corning, New York dedicated to the art, history and science of glass. It contains over 40,000 objects representing 3,500 years of glass and glass-making from Egyptian to 20th century.

This seems like a painting but is made of over 5,000 pieces of glass and is a mosaic masterpiece …